The Wahoo ELEMNT BOLT  is a really good GPS cycling computer. This becomes clear when looking at most of the product reviews, and I can also second it from my personal experience.

But can it be used for mountain biking as well, especially for riding single tracks, including routing?

I couldn’t find any further information on that, especially since most reviews have been done by road cyclists.

Note regarding the image: This doesn’t show an ELEMNT BOLT, but an ELEMNT – which has a bit larger display. The onscreen arrangement and resolution is similar.

The Basic Problem – Navigating the Woods

When riding a mountain bike in the woods, in contrast to riding on the street, navigation and orientation are a bit difficult. After all, there are not a lot of signs in the woods (apart from hiking path signage), and many paths are so small that they can be easily overlooked. This is especially the case when riding single trails. And often the speed is quite high, which means you don’t have time to orient yourself.

That’s why it’s quite helpful to have a device which constantly tells you where to go. The requirements for such a device are from my point of view:

Personally, I’ve tried the following devices in the past:

With none of these devices did I have a lot of fun riding my MTB.

To put it in a nutshell: the ELEMNT BOLT fulfills all requirements listed above. Now, the details:

The route can be stored on the BOLT very easily using the perfect smartphone integration. This can be done without any configuration effort, anytime, and (only) wirelessly, even on the go.

To be more precise, you use the Wahoo app’s integration with different cycling / outdoor services. Currently supported are for routes with turn directions: Komoot and RideWithGPS, plus the Wahoo ELEMNT app itself.

Example: You plan the route with Komoot, which then automatically appears in the Wahoo ELEMENT app and can be sent to the ELEMNT BOLT via bluetooth.

The actual route calculation doesn’t happen on the BOLT, but rather the turn directions need to be contained in the route data. This has the following advantages:

Side remark: The smartphone can stay at home. The BOLT works autonomously, once the correct route has been loaded.

The ELEMNT BOLT by default comes with a display page configuration “map” which also displays the speed. Any other further data fields can be easily added to it. With more than 2 data fields the maps display starts to become too small to be useful though. A key press leads to all other display pages (which are also freely configurable).

Some word regarding the map display quality: The ELEMNT BOLT has a black/white LCD display (resolution 320×240) with illumination, which is only needed in the dark or dusk. I was a bit skeptical first, because I’m a bit spoiled by all the very good smartphone displays. The BOLT’s display is totally sufficient for navigating using the map from my experience. The route and paths can easily be recognized and distinguished. A realistic impression of the map’s resolution can be seen in the image in the first paragraph of this page.

Wahoo uses OpenStreetMaps as it’s map base material. These OSM maps can be very detailed. In the Berlin area for example, every tiny path can be found in the map – in other regions this can of course be different.

Wahoo also updates the map material regularly, the updates can be very simply downloaded to the device.

Maps are provided for all of the world’s regions.

4: Rapid Reaction to Changes in Position and Direction

The ELEMNT BOLT supports GPS, GLONASS, and Galileo (and some more) and the speed and accuracy of positioning is absolutely sufficient for a fast-paced ride through the woods. I need to say that I wasn’t able to test this in very deep valleys (where sattelite connection may be worse).

If the map is set to be rotated with the riding direction (not pointing north), it turns just as you would expect it (no jerky turning of the map etc.)

If you ride a specific track, the map displays the surrounding paths. The path you need  to ride is clearly indicated. If you get closer to a turning point, the distance to it is displayed. From a certain distance on, a popup is displayed and there is an acoustic signal, and also one from the integrated LEDs. Additionally, the LCD display’s illumination turns on for a short period.

If you miss a turning point or get off the track, the BOLT also clearly indicates that with a different acoustic signal and a different LED color (red) for a couple of times. After about 10 seconds, this stops, so you can also keep on riding off the planned track without being bothered by constant alerts. This can be seen in the image on the right.

After getting off the track, if you get back on track at any place of the route, the ELEMNT BOLT reacts just as you would expect – it quickly recognizes that you’re back on track, and continues with guiding you on the track.

Also, you can start a route anywhere – you don’t have to pass the route’s starting point. As soon as the BOLT recognizes that you’re on the track, it turns on the routing.

Overall, the turn-by-turn directions and routing are very clear and can’t be overlooked.

According to different reviews and also from my own experience, the BOLT gets to at least 10 h on a single charge, with active routing, some illumination, LEDs and at temperatures around freezing point. When turning off some of the features, e. g. illumination or routing, you can probably get to the advertised 15 h, even at that low temperature (batteries last much longer when it is not that cold). So the BOLT seems to squash all competing devices with similar functionality.

As expected, the BOLT is small (so it’s protected by the stem and handlebar a bit) and light, and of course, sufficiently water resistant. I didn’t do any crash testing, but it sure looks quite robust. The mount also resists any strong shocks and vibrations which are common during mountain biking.

Those physical properties make it much better suited for outdoor sports activities than e. g. a smartphone mounted to your handlebar.

The BOLT doesn’t have a touch screen, but physical buttons on both sides and at the bottom edge of the display. They can be used just fine even with winter gloves.

These buttons also offer good usability when the device is wet. With touchscreen devices, one often hears reports about input problems when they are wet (e. g. with some Garmin devices).

Wahoo uses uses Openstreetmaps as the basis for its maps. Not all details are visible, of course (Openstreetmaps contains data such as trees, powerlines etc., which are irrelevant for cycling) but the level of detail is totally fine when riding a bike (in and out of the city).

To compare some views, below are actual photos of an Element BOLT with map, and the same map view from Openstreetmaps.

Both examples show pretty well that all the necessary details regarding trails are visible, and also show that the different sizes of the trails can at least partially be seen. 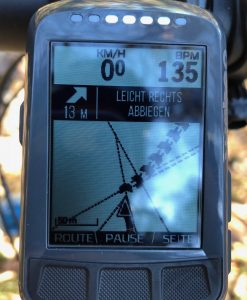 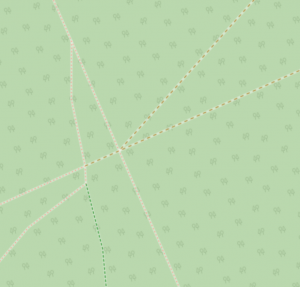 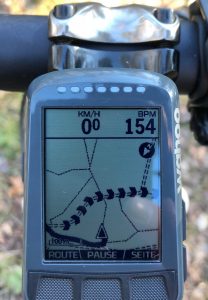 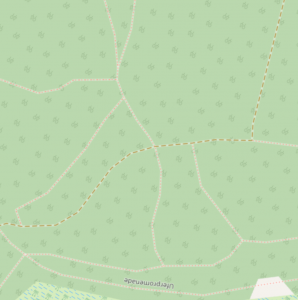 14 Replies to “Mountain Biking with the Wahoo ELEMNT BOLT”