This is the first post of a series of posts about things I really dislike about Mac OS X.

When I came to the Mac from Windows and Linux about 12 years ago, I was shocked to notice one functionality which is missing in the Mac OS X Finder: The possibility to cut one or more files (or directories) and paste them elsewhere.

And still, even  after 12 years of using a Mac, this topic regularly bothers me. And I still haven’t found any reason why Apple doesn’t allow cutting and pasting of files and folders.

The Most Important Tools of Every Computer User

Arguably, two of the most important tools of every computer user are:

No matter if you use Mac, Windows, or Linux, you use these commands almost universally throughout the whole operating system. They work between different applications, and also on totally different types of content (files, folders, text, image, audio, etc.) And I think everyone would agree that they are also extremely important for managing files and folders.

Most computer users need to do quite a lot of file management tasks which require moving (not copying) files and folders from one place to another. Some examples:

For all these tasks, Mac OS users need to use drag and drop instead of cut and paste, because the Finder simply doesn’t have cut and paste.

The Problems with Dragging and Dropping Files and Folders

A cut and paste operation with files and folders in Mac OS Finder is only possible by using drag and drop. But dragging and dropping has many disadvantages from my experience:

When you start the file management task you need to perform, e. g. move a file from one project folder to another, you always start off with one Finder window. So, you need to open a new Finder window first (which requires you to remember a keyboard shortcut or perform at least 2 mouse clicks).

The added second window then requires additional effort for window management: both windows need to be resized and placed properly, so they don’t overlap and are large enough. Mac OS doesn’t provide any tools for that task, but more on that in a future post.

2. You Always Need to Navigate to the Target Directory From Your Home Directory

In the example above, you need to navigate from your home directory four levels deep into the directory structure, in order to get the second Finder window right. And that even though the target directory is just two clicks away in your original Finder window.

3. Dragging and Dropping Files Is Difficult with Sub Directories

If you drag files to a Finder window which shows a list of directories, Finder by default opens up any directory that you hover over. In my opinion it’s not at all easy to hit the correct target sub directory. This is especially the case if you’re not sure beforehand which is the correct target, and instead try to figure it out while you’re doing the dragging. (The strategy I use to buy me some time when doing this is to keep my mouse moving in circles, because then Finder won’t do anything. No kidding.) And even if you want to drop in the main directory (not sub directory) it’s also not easy, because you’re never sure where in the window you can drop your items in order for them to go in the main directory (and not in one of the sub directories).

As you can see, the “red” drop zones are limited to text elements (or in the case of the size column, the two hyphens). I literally found this out while writing this article. In the past, every time I had to use drag and drop, I wondered what the logic behind all this was – so it really took me some research to discover. I find this jarring, considering Apple’s reputation for having such a great usability.

Another problem case is when there are a lot of sub directories. Imagine you want to drop into a directory which is not currently visible. In this case, you need to drag near the window edge in order for Finder to scroll the view. But I find this scrolling motion to be totally incontrollable. It’s jerky, and often much too fast. I’m simply not able to use it.

One problem occurs when going into a wrong directory: You accidentally hovered over a wrong sub directory for too long. Then the Finder suddenly opens up that sub directory. In this case, there is no way you can go back. The only option is to hit ESC and cancel the whole operation, which sends you back to your initial directory (e. g. home). That is especially annoying if you had already navigated through a deep directory path (and only failed at the last directory level).

The way I personally deal with all this is the following. I always click myself through to my target directory, and directly drag and drop there. I hate the dragging over sub directories to open them up. Just as I hate the dragging near the window edge to scroll a large directory list. Those things just don’t work for me at all. And I’ve tried them. Many, many times.

So, as I’ve shown above, draggind and dropping is not a good solution.

How Could Cut and Paste Work in Finder?

From the user perspective it would be simple to provide cutting and pasting in the Finder. It would take not much more than to enable the inactive “Cut” command in the Finder’s edit menu (and of course the related “Paste” command): 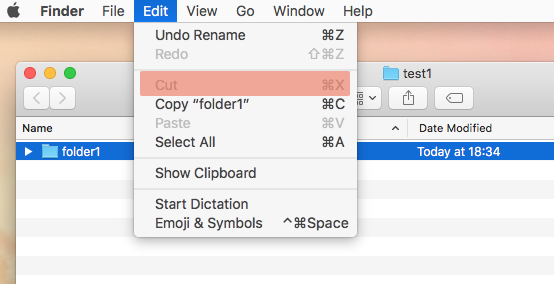 Why don’t we just take a look at how some other operating system has provided this functionality for decades? That is – how can the user do cut and paste on Windows?

Below are some screenshots from the Windows Explorer. By the way, this works similarly on Linux (KDE, GNOME).

Why make it so hard when it can be so simple…

Worarounds to Drag and Drop

As always, there are other ways to get a cut and paste functionality. Both of the workaround described below are just that – they are nothing I would recommend to my grandma.

Install a Finder Alternative that Supports Cut and Paste

Many Finder alternatives have a cut and paste command. Examples:

The downsides are of course the price, and that you will have to adapt your behavior. And somehow it feels stupid to spend $ 40 on a software just to get a single command.

Use the Command Line to Move Files Around

Actually, the command line (application: Terminal) is a very powerful tool for file management tasks. But this is nothing for a novice user. The mv (move) command below moves one or many files and folders to some other place:

An introduction to file management with the command line can be found at MacWorld.

Why Doesn’t Apple Simply Give Us Cut and Paste in Finder?

The question remains, why doesn’t Apple simple provide us with this basic functionality? There are actually only a few arguments at all that I’ve heard or can imagine.

“Cutting files and even folders is DANGEROUS. If after you cut a folder, something crashes, or you simply forget about it, the whole folder is LOST.”

This is the most hilarious argument I’ve heard. It only shows one thing: That whoever brings it forth, has never used anything other than a Mac.

In decades of using cut and paste on Windows and Linux I’ve never had any issue with “disappearing” files. This is due to the fact that “cutting” actually doesn’t cut anything. It just marks the files and folders for a later paste operation. So if after this first step anything goes wrong, nothing happens at all!

“Apple will remove file access in the future anyway. So you shouldn’t worry about directory structures at all. Just store everything in iCloud or leave it in the default location, use Spotlight search etc.”

The “cut” functionality has been missing from Finder for at least 12 years. We’ve been only able to put (some) files on iCloud for a couple of years.

But even in the cloud, I would like to maintain a clean directory structure. This requires me to do all the tasks described above.

So please, Apple, make it possible to use cut and paste on files and folders. It would make life so much easier for many of us.

If you, the reader, feel the same way, please leave a comment for Apple on their Mac OS feedback page.

The Mac OS Finder doesn’t support cutting and pasting files. This is a basic functionality which is available on all other desktop operating systems. Apple could likely integrate it easily into the Finder’s interface.

2 Replies to “Things to Dislike about Mac OS X: 1 – No Cut and Paste in Finder”